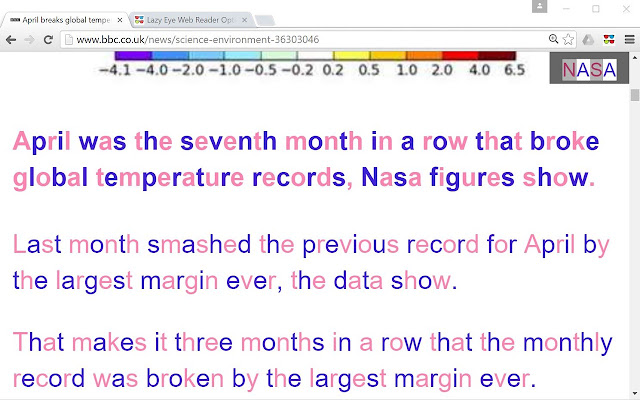 Web Reader for Adults with Amblyopia
Lazy Eye Web Reader is a Google Chrome Extension for adults who suffer from amblyopia (lazy eye). Until recently, it was widely believed that only children (younger than 9 years old) can be treated and that once a person moves beyond a critical period of development that it is no longer possible to treat amblyopia (lazy eye). Common forms of treatment in children include patching the good eye for long periods of the day which develops the lazy eye’s capabilities or using eye drops to blur the good eye for similar effects. These methods have proved ineffective in adults.

Amblyopia occurs during early development and is usually caused by some kind of defect in one of the eyes. The other (good) eye and the brain are able work together to suppress the faulty visual information coming from the bad eye. When the original defect is rectified, using the patching method retrains the brain to accept information from the lazy eye. This relies on the ability of the brain to retrain itself (Neuroplasticity) which is much greater in children.

Recent studies have however found that although adult brains don’t retain the same levels of neuroplasticity as children, they do still have the ability to retrain and that by using binocular training techniques, visual acuity may improve. The basis of the binocular training technique is that by using the eyes collaboratively together instead of trying to train one or the other (e.g. monocular – patching) we can improve binocular vision which improves ultimately improves the lazy eye.

The Tool
Lazy Eye Web Reader is a tool that can be downloaded from the Chrome Web Store. It is designed to be used in conjunction with 3D Anaglyph glasses. When enabled a new icon appears on the browser bar.

When clicked it analyses the content of the web page being browsed and changes the colour and transparency of each alternative letter of the content.

By right-clicking the icon and selecting “Options”. You are able to calibrate the colours to match your analglyph glasses as well as select which of your eyes is lazy. The letters presented to the good eye will be more transparent allowing the lazy eye to become more dominant in the process.

Once enabled, use your browsers native Zoom functionality to increase the text to a size that is comfortable for you lazy eye to read. At this point you are all set.

How Long for Results
Studies using similar techniques have indicated that improvements in visual acuity may occur in as little as 10-12hrs (based on training for 1hr per day). While some improvements may be experienced in this relatively short time frame, significantly retraining the brain can take months or even years. This may be analogous to the amount of time it takes someone with a brain injury to recover.

Another time-frame to reference maybe that of learning or mastering a particular skill. It takes many hours to master a particular skill. Use of binocular vision could be considered a cognitive skill. Steve Jobs (former Apple CEO) believed that it takes 10,000 hours of practice to become truly great at something.

The Disclaimer
The research associated with treatment of adult amblyopia is still ongoing and is likely to take more years to complete and be ratified by both national and international health authorities. If you chose to use this tool, it is recommended that you take advise from a qualified optometrist, optician or ophthalmologist. If at any point you feel any pain or other discomfort in either the eyes or head, reduce the amount of time you are using the tool on a daily basis.